First Principles: American Colonies Had Long Been Stopped From Abolishing Slavery Or Even Limiting It By Great Britain

“…. (A) disposition to abolish slavery prevails in North America, that many of Pennsylvanians have set their slaves at liberty, and that even the Virginia Assembly have petitioned the King for permission to make a law for preventing the importation of more into that colony. This request, however, will probably not be granted as their former laws of that kind have always been repealed.” – Benjamin Franklin, in a letter to Dean Woodward (1773) 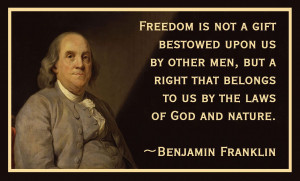