Thought For the Day: Injustice Anywhere Is A Threat To Justice Everywhere

Posted on June 6, 2020 by alohapromisesforever 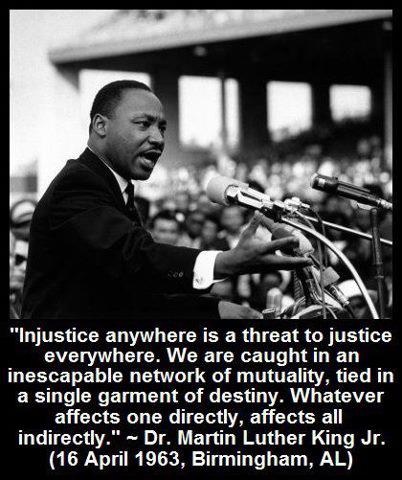 Injustice effects and impacts us all.  It differs little rather it’s police brutality (the majority of which at last study I have read is committed against whites more than blacks truth be told – see the multiple studies that came out and during the King v. State of California and the City of Los Angeles) or rather it be rioters beating a store owner to death for trying to protect his and other people’s businesses.  Injustice should always be properly and strongly advocated against.  But, let’s not miss the point that ALL LIVES MATTER.. not one subdivision of the human race, but all of the human race. Make no mistake of it.  Rather you believe in Adam and Eve or a protozoa that somehow evolved into present shades of mankind, we all have common ancestors.  We all bleed red.  We all want to leave the world a better place than we have found it.

Writer, poet, musician, surfer, father of two princesses.
View all posts by alohapromisesforever →
This entry was posted in Thought For the Day and tagged Anywhere, Everywhere, Injustice, Justice, Martin Luther King Jr, Thought For the Day, Threat. Bookmark the permalink.