First Principles: The Known Propensity of A Democracy Is To Licentiousness Which the Ambitious Call and Ignorant Believe To Be Liberty

“The known propensity of a democracy is to licentiousness which the ambitious call and ignorant believe to be liberty.” – Fisher Ames (1788) 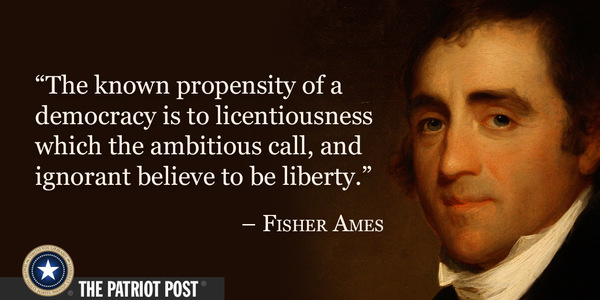 As we move further from the republican form of government our Constitution established, further slipping into ‘democracy’, we are reminded nearly daily that the licentiousness led to is the rule of the mob that our Founding Fathers railed against time after time.  The warnings against this aren’t just found in The Federalist Papers but littered across the notes of the Constitutional Convention and in the words of multiple Founding Fathers.

In this, we are finding that it is wise to keep note of history and learn its lessons.  Where we do not, as is often said, we are doomed to repeat the worse of our days.  It cannot be long after we have disrupted lawful society and defunded the police and so on that a strong man (or woman) will appear promising the missing lawfulness and we will find ourselves under the yoke of tyranny.   This then is the purpose of the Second Amendment.  Not to go hunting.  Certainly not for mere target shooting.  But, rather that when tyranny comes to call, free persons have their ready answer to reclaim freedom and liberty.